While we are still in the teeth of the rainy season, work hasn’t stopped at SC Observatory. In preparation for the upcoming clear sky season we have been making a number of improvements.

The new fork mount arrived from Officina Stellare and has been crane lifted into place inside our eastermost clamshell dome. This mount is an absolute beast. Two of the four custom plates for the OS RH300 telescopes are in place, with the others coming soon. We expect Giovanni Del Lago and the team from OS to arrive in Thailand in early October to complete installation of the array and fine tuning of the mount. 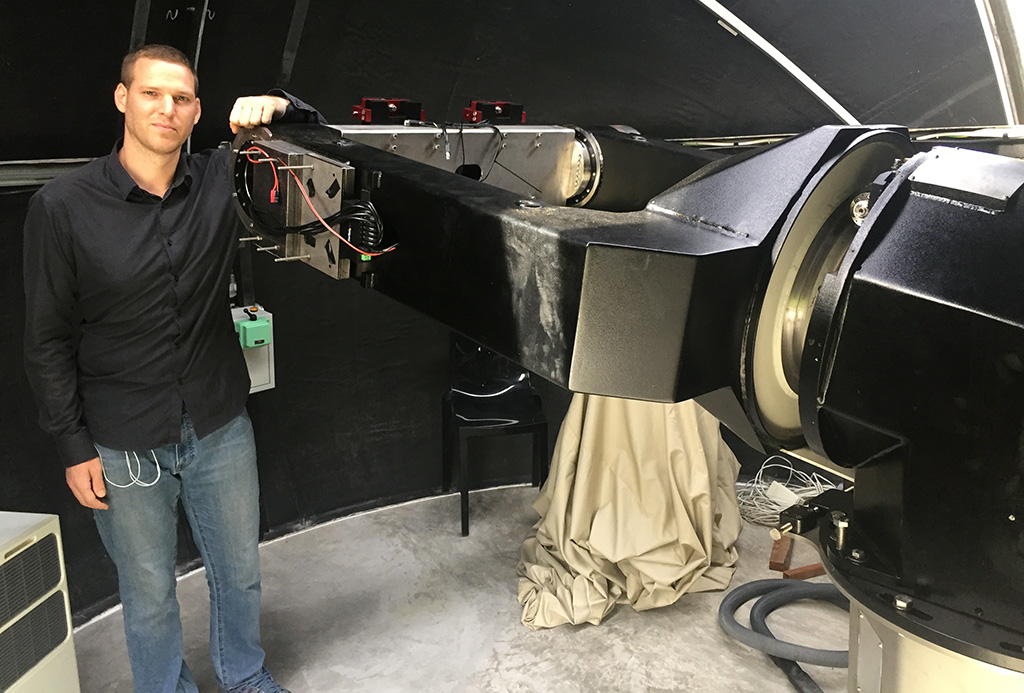 For the past several years we have relied on a series of wifi repeaters to provide network access on the observatory grounds. The main router was approximately 120 meters from our control room, and our signal suffered greatly. Moving image files taken from three telescopes across this network to our NAS was painstakingly slow, and we suffered our share of network dropouts. Additionally, we relied on running long Cat6 cables from the control room to the domes, and these cables were subject to failure due to weather conditions.

This month fiber optic cable was installed across the entire property. Our control room is now hard wired to the main router, and each dome is also fiber connected via a series of network switches. Speed and reliability have increased exponentially.

Our control room has also undergone technology improvements. We have reduced clutter by eliminating three laptops, each of which controlled one telescope and imaging setup. They have been replaced with a single desktop computer with a very large LED TV monitor. A grid of teamviewer sessions will allow us to control each of our 6 imaging setups this season, connecting with mini computers which have been placed on each telescope. The recovered table space in the control room will be useful as both a workbench and a spot to place our glasses of single malt.

One of our goals is to be able to extend operation to weekdays, controlling the telescopes from Bangkok. We have been putting a number of pieces in place in preparation for remote operation. We are in the process of adding control hardward and software to the domes. Our weather station has been repositioned and recalibrated, providing a much clearer view of sky conditions. APCs are in place, and we are configuring the APCs and mini computers for graceful shutdown on power loss and automatic startup on power restoration. Additionally we have purchased network controllable power strips, and while they currently provide power socket control through the local network we will be opening router ports so we can control power remotely. We have purchased a number of IP cameras which will provide us both daytime and nighttime views inside our control room and each dome. We hope to be testing remote operation at some point during the upcoming imaging season.

Now all we can do is wait for the rainy season to end so we can begin shooting. Stefan has been going through years of accumulated hardware, sorting, labeling and storing. Our control room has been quite cluttered, but with the addition of an attached storage shed with a lot of shelf space, we expect to be able to see the control room floor soon.